Following on from his popular presentation on the Burnage National School, St. Margaret’s Church archivist John Pollard kindly offered us a guided tour of the Church and grounds as part of our Memory Bank Festival.

Gathering under the lynch gate on a bleak November afternoon, spirits were not dampened as we were joined by John, who immediately got things going by giving an account of the lynch gate and its creation as a memorial to the Great War. Countinuing around the Church’s exterior, the theme of its continual development was raised, with each extension and improvement detailed by John. By the original entrance to the Church is a statue to St. Margaret of Antioch above a dragon, with John explaining her refusal to renounce Christianity at a Roman Governor’s request causing her martyrdom. 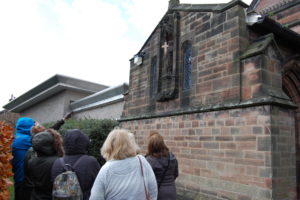 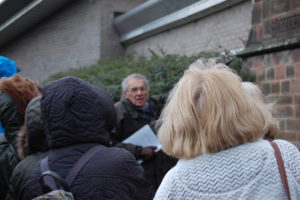 Gaining shelter from the elements, we entered the Church and were shown by John a small display erected to commemorate the dead from the parish of Burnage in 1917. Many of these died, or perhaps more chillingly drowned in the mud at Passchendaele. Among the other men who died were E.S. Bacon of the Royal Flying Corps, whose father lived at Shawbrook Lodge (Presbytery of St. Bernard’s Church) and was Chairman of the Manchester Ship Canal during the war.

In readiness for our visit, John had kindly gathered copies of many original documents relating to the Church’s history. Among these were copies of the original Church’s plans, maps of the boundaries of the ‘new’ parish, posters proclaiming the laying of the Church’s foundation stone, and illustrations of the Church over the years. Continuing, we learned that the architectural critic, Pevsner, thought the only feature of note in the building was the stained glass window in memory of one of the Slater family [of Shawbrook Lodge?]. 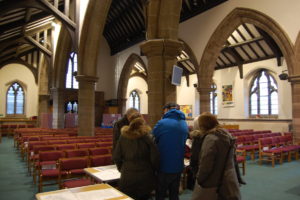 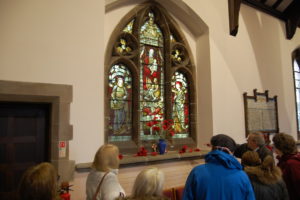 John guided us up into the Chancel, showing us the stained glass installed after the war; a beautifully printed list of the ten commandments; banners commemorating the Church; all while inforning us of the changes to the pulpit, font, methods of worship in the parish. 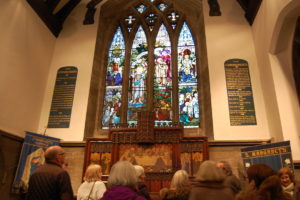 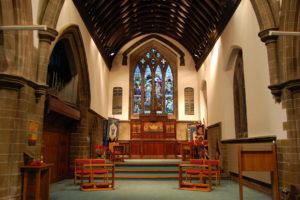 Our thanks to John for giving us a wonderfully informative and enjoyable session, and to all at St. Margaret’s for their welcome and kind accommodation of our group. Why not join us on Saturday at 2:00pm for our Family Games Challenge, or on Tuesday afternoon as we show local films from the North West Film Archive?