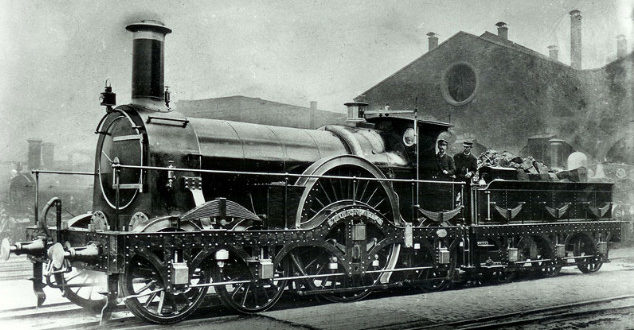 We were taken back to the age of steam this afternoon, with Eddie Johnson talking us through a huge number his historic photographs of the railways. The focus was less on the great locomotives that powered their way across the country than the people who worked on, or whose lives were shaped by the railways. There were images of drivers, firemen, linesmen, navvies, station masters, porters, and passengers, with a fair few spotters too! Attention was drawn to the costumes of the people, with the marked divisions of class and wealth visible among the public, with seniority, rank and position clearly demonstrable among the railway companies’ workers.

While focus was given to the immediate area around Manchester, showing 19th and 20th Century images of Manchester Central, London Road, Trafford Park, Gorton and the peaks, his travels across the country were reflected in his choice of material, with images from London King’s Cross, Scotland, Northampton and Gateshead (among others) making an appearance.

A keen railway photographer in his youth, many of the images displayed were his own, taken around the old MS&L line now known as the ‘Fallowfield Loop’. Superb images were shown of Fallowfield, Withington, Didsbury and Chorlton stations- only half of Fallowfield now surviving- and there were two fascinating shots showing the (twelve?) staff employed at the stations on the line. Of particular interest was a series of photographs showing the railways ploughing through what was later to become the Burnage Estate, construction of the bridges on Parrswood Road revealing pastoral scenes in the background!

We would like to thank Eddie for speaking to our group, and welcome anybody who fancies popping in on Tuesday afternoons at 2:00 for more of the same.