Today’s session was led by Stacey from Southway Housing, assisting us as part Southway’s Get Online week.

It was a chance for those attending to get a sense of the enormous wealth of historical material that can now be accessed online, as well as to receive some support in using a computer and searching for material on the internet. Various topics were examined- not restricted to the local area!- including information on a surname, the munitions factories at Gretna during the war and a detailed search of some of Manchester Libraries’ newspaper archives. 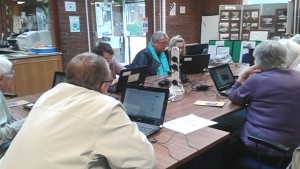 We later looked at some digitised pages from Slater’s Directory of Manchester, 1911 edition. Prompted by a stray remark last week, ‘I’ve always wondered about that house…’ we discovered that Shawbrook House (visible from the window in the library) was the residence of a Mr Max Cohen in 1911. Further cursory searches using Google revealed that his son Alan attended Rugby School and- from the Peterhouse Register 1911-1930- Peterhouse College, Cambridge.

A brief look at Pigot and Slater’s much earlier directory of 1841 ended the session. A Mrs. Hannah Nabb who ran a ladies’ boarding school in Burnage aroused some interest, especially as another quick Google search revealed a notice from The London Gazette in 1839 that her husband, the auctioneer Thomas Nabb, had previously been imprisoned in Lancaster Castle as a debtor.

Why not come along to the next meeting and add to the discussion?