We were treated to two sessions with historian Ali Ronan, both at the library and ‘on tour’ at the Garden Village, as part of this month’s Burnage Memory Bank festival.

A packed house greeted Ali at the library on Tuesday 14th, to listen to her research on the radical personalities in the early years of the Garden Village. As she reeled through a list of individuals, ranging from housing reformers to conscientious objectors, publishers to politicians, and journalists to campaigners for women’s suffrage, it was impossible not to be impressed by the sheer concentration of talent in such a small community.

Not limited to individuals, families such as the Wallheads, Richard and his daughter Muriel, one of the first female Members of Parliament following the 1945 election, were also comprehensively covered. We were all left enthused by the session, excited by the discovery of so many prominent characters, but also keen to dig deeper into the stories of these fascinating people. 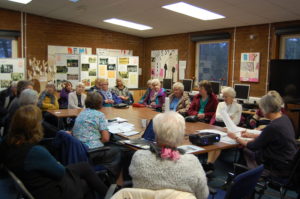 A large turnout braved the winter conditions the following Saturday, as Ali complemented her earlier talk with a walk around the Village itself. Halting outside the residence of each notible personality/family, and there were many halts(!), she gave a short talk about that resident’s contribution to local and national political life. With such short journeys between the featured houses, it was easy to imagine the networks at play- both formal and informal. As well as learning about local political personalities, the walk was also a wonderful opportunity for many people of Burnage to explore an area they had never seen before, and appreciate the idealism of those whose drive and vision created this community back in 1908. 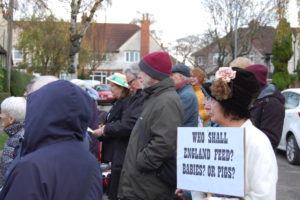 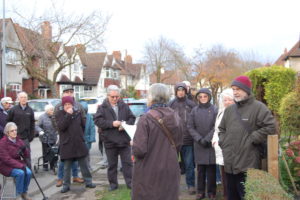 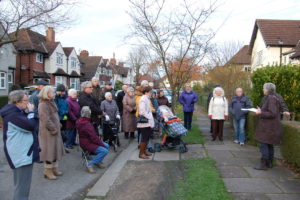 We were fortunate to assemble afterwards at the Garden Village Hall, where Jill, Toni and Doreen from our local history group performed a fantastic reconstruction of the meeting organised by three Garden Village women in November 1916, in the very same hall, that led to the Burnage Milk Boycott. These women took on the wartime speculators and won, successfully bringing down the price of milk to within the means of ordinary families. 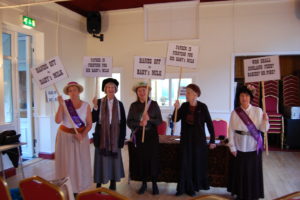 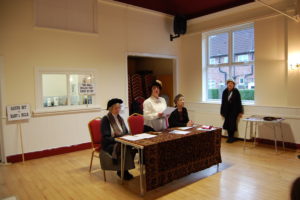 Our sincere thanks to Ali for a wonderful series of events, and Ken Walker and Alison McCartan from the Burnage Garden Village for their tremendous help in allowing both the walk, and use of the hall at the Garden Village.