To celebrate the 40th anniversary of the opening of Burnage Library, we are delighted to take a look back at the site where it stands with Revd Dennis Lloyd Nadin of Burnage Heritage (http://burnageheritage.org/). 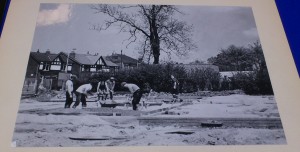 “The previous libraries I think still exist at the side of Aldi, the detached house in Bournlea Avenue and the large detached house on Burnage Lane just before the Garden Village.

During the War, before the new library was built on Shawbrook Croft, there was an emergency water tank, presumably for the fire service dealing with incendiary bombs, which stood up four to five feet above the ground, unlike the one at Hans Renolds which was built into the ground as the works had a fence around it. I recall it used to freeze over and we often broke off pieces and ate them as if an ice lolly. We must have been hardy creatures and it must have built up resistance to so many germs!

Further back, close to the first house in Shawbrook Rd, was a squat brick built communal air raid shelter where my mother, my sister Valerie and I often spent air raids when my father was either working or doing fire duties at Fairy Aviation Works. The Air Raid Wardens would check on people locally and on their way back one of them – Mr Watson from Westdean Crescent – used to call and whilst my mother pushed my sister in the pram he would gather me in his arms and we would rush to this shelter. Inside, there would be community singing whilst the aircraft went over.

The croft was undeveloped even after the war. I remember that the Burnage gangs (schoolboys) each had their territory and that was where some of us built our dens. These consisted of the litter of the war – corrugated iron sheets which made substantial premises in the hedgerow which ran along the north edge of the site, with Broadhhurst “farm” on the other side from which milk was delivered, though there was no sign of a cow – the milk came from Levenshulme.

If you have your own memories of Burnage Library, or any photographs you would like to share, we’d love to hear from you. Get in touch via our Contact page, or pop in to the library in person.