It was a pleasure to welcome back Tony Longshaw, with his talk last time on the rivers and streams of south Manchester living long in the memory.

Today’s topic was a virtual tour of Manchester’s blue plaques, illustrated by photographs taken by his son thirty years ago (themselves now an historical curiosity!) We began, however, with an introduction to the idea of the blue plaque; Manchester’s tardy efforts beginning significantly later than London’s, and performed without any fanfare, along with discussion about the manufacture and materials of the plaques themselves. 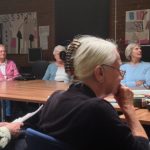 Our initial focus were the sites associated with the Civil War,  including a description of tussle between Didsbury and Chorlton over Prince Rupert’s plaque, with both claiming the site of ‘Barloe More’. Discussion also included Cromwell’s oft moved statue and John Bradshaw, President of the High Court of Justice which condemned Charles I in 1649.

Innumerable other subjects were covered later, including industry, politics, literature and the arts, encompassing figures such as Richard Cobden, Elizabeth Gaskell, Charlotte Bronte, Charles Halle, Friedrich Engels. Also included were more obscure names to the modern audience, such as Sir Harry Smith whose wife Lady Smith lent her name to a settlement in South Africa… 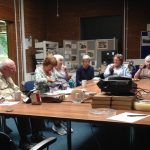 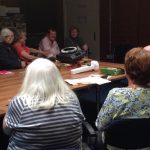 Also of interest were the gunshot marks on a plaque in Hulme, as well as the corporation drainage pipes needed to secure the plaques to the narrow walls on the flats. Note was also made of the obscure shape of Walter Carroll’s plaque on Lapwing Lane, the price of paying £100 over the more typical £300 for the porcelain!

Our great thanks to Tony for another wonderful talk. Why not come along next week where we will look at the letters of Elizabeth Gaskell?