This afternoon we were joined by John Pollard, archivist at St. Margaret’s church on Burnage Lane, for a session focusing on the St. Margaret’s national school. John began with a presentation covering the history of the school until its closure in the mid 1930s, starting by giving us some background context to Burnage and its growth in the mid-nineteenth century from the census returns. Occupations changed significantly in this period, with a decline in traditional agricultural labour and weaving matched by significant growth in positions which serviced the needs of the new merchant houses: gardeners, coachmen and so on. 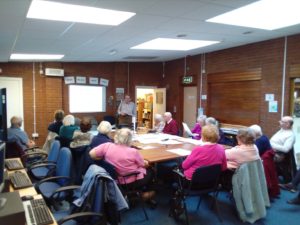 We were given the background to the school’s formation, learning that the township of Burnage for a time belonged to the parish of St. Paul’s in Withington, heard explanations on how so few members of staff could teach so many pupils, and were shown a great many images and scans of original documents, including contemporary school report, items in the parish’s magazine and plans of the school’s layout.

Looking at his copies of the school’s registers from 1860 to 1862, John talked us through his research examining the pupils in attendance over those three years, noting their parent’s professions and the small numbers of pupils who featured across the entire three year period. Interesting to note was the great disparity between boys and girls, with far more girls in attendance over the period- the boys presumably having to work.

John arrived armed with a great number of archival documents, and after a quick tea break we were allowed to look over these at our leisure. It was wonderful seeing the historic school registers, large copies of older O.S. maps, an original copy of the document transferring the school to the new parish of St. Margaret’s, and the other items he holds on behalf of the parish. 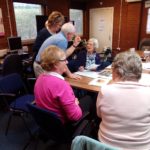 Our thanks to John for a fascinating session, one which we hope to build on with further research into the period. We will not meet for the next fortnight due to the Easter holidays, but welcome you all to our next session on 18 April!