Resuming our sessions after the Christmas break, we spent the afternoon immersed in the 1861 census for the Burnage area. After a brief introduction on the origins of the census, looking at how it was gathered and the type of information it collected, we dived into the census records themselves.

Many items of interest were noted- the very first records we encounter in 1861 relate to what we’d now class as Ladybarn, the railway line later severed this area from the rest of Burnage! It was fascinating to note how rural the population of the area was; a significant number of farms thrived in the parish, housing a number of farm labourers  from across the country.

Domestic staff too were drawn from across the United Kingdom, with many households in Burnage able to afford such assistance. By this time Burnage was home to a number of wealthy industrialists, prominent residences forming a cluster around Burnage Hall and the Acacias, and their numbers would increase as the century continued.

To visualise the routes taken taken by the census enumerators, we referred to the NLS Ordnance survey map from 1845- mapping their course across the local area. 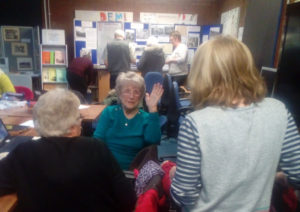 It was lovely to see Pauline today for the first time- she and her daughter having added so much to our website.

It was great to welcome new faces today, with people also bringing items which we can upload onto our Memory Bank website. A collection of documents and badges from one lady’s father’s Home Guard service standing out in particular, we also looked at a collection of old Manchester Liners magazines from the late 1970s/early 1980s, along with a booklet from 1991 commemorating the parish of St. Bernard’s.

Come along next Tuesday, join the discussion and feel free to bring something!