We spent this afternoon immersed in old maps, exploring the magnificent resource provided by the National Library of Scotland. While we’ve used this site before, the recent extension of their 25 inch digital maps to include the Manchester area provided a little needed invitation to revisit the material. At this scale  postboxes are marked, along with the outlines of individual properties, amenities within public parks, tramlines (and their shelters) down familiar trunk roads, amongst other details. 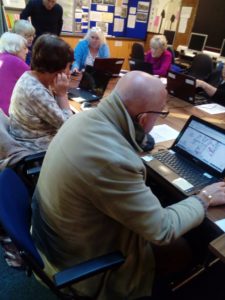 Of special interest was the course of the Thirlmere Aqueduct, shadowing much of what is now the Fallowfield Loop. Those attending also looked at their old homes which were swept away by the clearances of the 60s, the homes of relatives they used to visit, schools attended, places where they holidayed and the houses to which they were evacuated during the Second World War.

Why not follow the links and have a look for yourself?