Undeterred by the showers outside, a group of us set out from the library to explore the concentrated remnants of 19th century Burnage. We were delighted to be joined by the Rector from St. Margaret’s, Revd Alan Pugmire, who shared with us his extensive knowledge of the church and its community. Looking out from under the lynch gate we imagined the scene over a century earlier, where the house ‘Bourne’ was located alongside a direct path leading to Peel Moat, and from which the great mills at Reddish were visible. Guided around the church grounds we admired the depiction of St. Margaret standing over the dragon, located on the porch.

Passing the Farmer’s Arms we were told of the landlord at the turn of the C20th, David Wigglesworth, who attended auctions to find interesting décor. He purchased one of the old Manchester Infirmary’s clock faces (located on Piccadilly), 7ft 10 in diameter, installing it inside the pub:

Nestled behind the Farmer’s (1898) and its stables are some old cottages on Church Lane, offering a glimpse of Burnage before the extensive corporation and private housing developments. 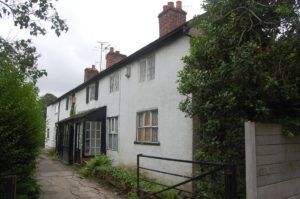 Further up Hyde Fold Close we find the source of the name, with the farmhouse of ‘Hyde Fold’ concealed among a recent housing estate. Impressed by its size, it was instructive to learn that the landholdings of the Bibby family extended almost as far as Christie’s hospital.

We emerged from Bibby Lane onto Bournelea Avenue, where we faced the site of the first permanent library building in Burnage, 32 Bournelea Avenue (1939 – 1947). A travelling library had its station on Broadhill Road just around the corner, but the blackout and advent of petrol rationing meant that this service was no longer feasible.

Doubling back on ourselves we tackled the overgrown passage of Bibby Lane behind St. Bernard’s school, arriving from the thickets to find another cluster of cottages. 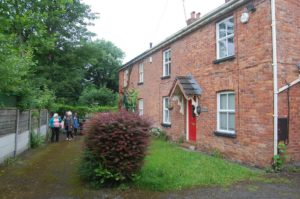 Turning right onto Burnage Lane we were back in familiar territory, passing more cottages opposite the library just by the Shawbrook. 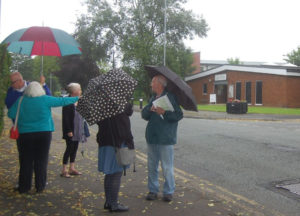 While it was now getting very wet, we journeyed on to take a quick look at the two sizeable houses in the middle of Burnage Lane, Shawbrook and Shawbrook Lodge. Now in a sorry state of disrepair, Shawbrook Villa was built by Charles Lings, a partner of W. Houldsworth of Reddish Mill, in 1861. In Tuesday’s session of the Local History group we noted that one of the sons of a future owner, George Edward (whose father Max was a naturalised German), had died in a London military hospital of tuberculosis in 1915. 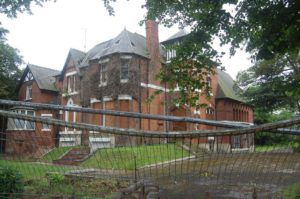 The Bacons of Shawbrook Lodge next door were also greatly affected by the 1914-18 war, losing two sons: Alan Harvey of the Manchester Regiment at the Dardanelles in 1915, and Edward Sivewright of the Royal Flying Corps (formerly of the Royal Field Artillery) in 1917, shot down while on his first sortie. The father, Captain William Bacon, was the third Chairman of the Manchester Ship Canal, assuming this role during the First World War. 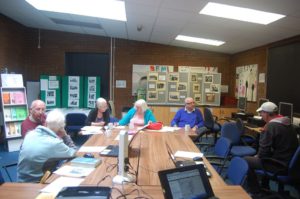 Returning to the library for some tea, coffee and cake, we examined some primary source material relating to the areas we’d visited. These included census records from some of the houses, photographs and maps, and first hand accounts of the locality.

Why not join us on our next walk?